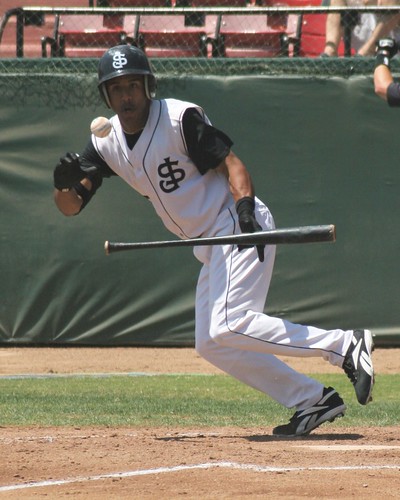 I have been a sports fan all of my life, it somehow relates to being the progeny of Ohio State alumni. But I never really thought about shooting sports until I got season tickets to the San Jose Giants in 2004. I started shooting in 2005 and shot three seasons. I also branched out and shot the Tour of California when it came into town, as well as some arena football, ice hockey, and lacrosse games.

Shooting sports is similar to shooting wildlife in that the action is quick and you have to be prepared for anything. But since sports are structured, you can anticipate. You can set yourself up for certain shots.

In baseball, that means getting down the first or third base line to catch the batters swing. Or setting up to shoot a pickoff play at first. Or ignoring everything else that is going on, and focusing on the second base when there’s a runner on first. At some point, there is going to be a play at second.

Other sports are similar, you just have to figure out where to be to capture them.