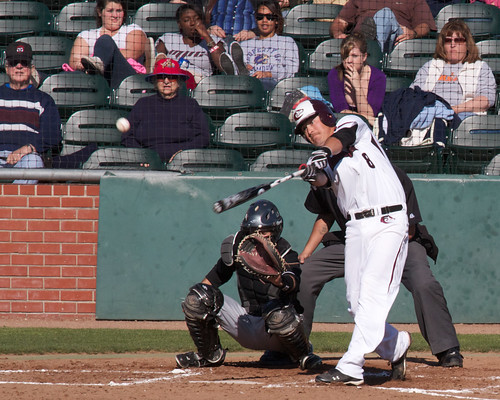 With pitchers and catchers reporting to Spring Training tomorrow, there is a baseball buzz in the air. Of course, the colleges started their seasons last week. While I missed Monterey Peninsula College’s home opener last week I wasn’t going to miss their second home game. And after this morning’s game, I have managed to double the number of ball games that I went to last year.

For those of you interested in just the baseball, the MPC Lobos started the season with five wins. They lost their first game this morning. Most of the wins were come-from-behind affairs with the winning runs scored in the ninth or extra innings. Their defense has been a little shaky, with 5 errors in the last 2 games. The Lobos have shown that they have the offense to overcome the errors, but it would be better not to make them in the first place.

Now let’s get back to photography. Every ball field is different and you need to learn where the good sight lines are for shooting the game. College fields are generally bad for shooting because they are surrounded by chain link fencing. You can shoot straight on through the fence at distant objects, but if you are trying to catch action at an angle through the fence, forget it. 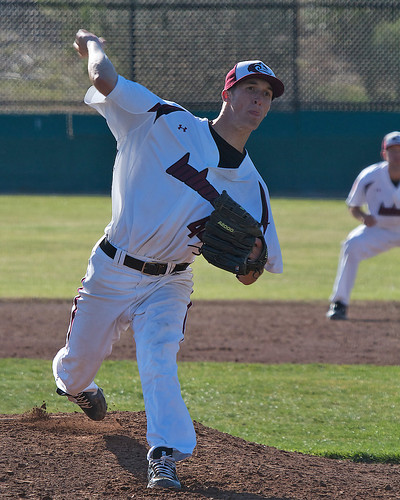 When I shoot Minor League games, I can park myself down the first or third base line and have an unencumbered view of nearly any play in the infield. I can shoot the batters in the box from either side (depending on whether they were batting right or left). I can shoot the play at first base (the most common play in baseball).

The way the MPC ball field is situated, however, these shots are impossible to get. There are basically two places where you can get unencumbered shots.

The first is at the net behind home plate, shooting through the net is not an encumbrance if you are close enough to it. This is a good place to shoot the pitchers, though you are a little too far behind the batters to get a good shot. My biggest concern about shooting here is making sure that I am not in the sight line of a fan watching the game. This is a place to move in take a few shots and move on. 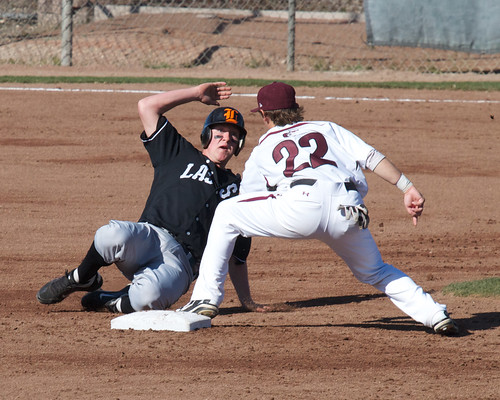 The second is behind the outfield fence. This is a new one for me, because most Minor League stadiums that I have been to, don’t have seating or viewing out there. They have a big wall with advertising plastered across it. MPC has through the chain link viewing in right field, but in left field you can get above the fence and have a clear view of the field.

The outfield sight lines are exciting because I’m getting to see action that I never did before. You can get batters facing you, and get an entirely different perspective on plays at second base (where before I only saw the back of runners heads, now I see their faces and expression. And I don’t need to struggle to get shots of the outfielders. 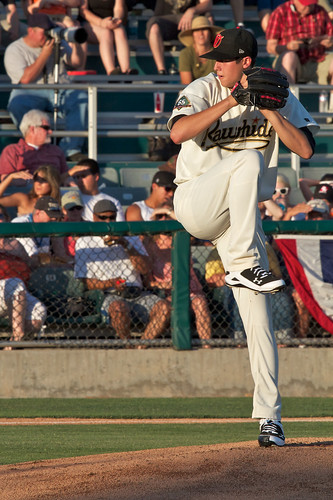 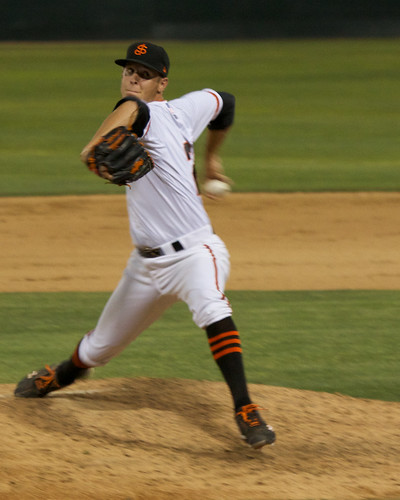 I shot my first baseball game of the season the other night. It was the California/Carolina League All Star Game. The best Single A advanced kids from both coasts.

Shooting a night game is always a challenge. Once the sun goes down, you never have enough light to shoot at speeds that capture the action. So you up the ISO and hope that the images don’t get too grainy. Even then you are stuck shooting at 1/100th of a second.

So you try to work with what you can. Capture the pitchers face and let the arm be a blur. Shoot batters as they’re set for a pitch and don’t try to catch the swing.

You can play with the images a bit afterwards. But there is only so much noise that you can remove before the image is blurry. And do you tinker with the white balance because of the lights, or just live with that yellow tinge?

After a while, you realize that it is best just to put the camera down and enjoy the game.